House Update!! (And other stuff!)

Other stuff first, I guess–

Ok–Lyrica hates me…it tried to kill me…but we called a truce…..
GABAPENTIN hates me–tried to kill me and almost made me do an impression of a water balloon–we called a truce….
My mammographer loves me–gave me a clean bill of health–with the exception of my genetic “fibro-cystic breasts”
My mammo/sonographer also loves me–ditto on “clean bill of health”/”fibro-cystic breasts” and, yes, lymph glands are “okey-dokey”! (Yea!)
Will see if my blood loves me tomorrow–or not….I’m betting that Rheumatoid Arthritis and Lupus tests will be negative–no family history
On the OTHER hand—-all three of my father’s sisters have Fibromyalgia….my mother’s sister has had fibromyalgia since before it became a thing that was clinically diagnosed. (And, no, I did NOT ask the egg-donor–she would tell me the sky is pink and raining orange bubbles, if, in the warped world she lives in, the answer would get her some attention–times a thousand if the question came from a human with testosterone and a penis! So, anything SHE.has to say has no intrinsic value!  (I have YET to discover exactly WHY so MANY old, horse-faced women feel that they must LIE to get attention….or WHY what they see in the mirror doesn’t match reality…but, sadly, it is the truth.  The disease starts kicking in when they get close to 40, and by the time they turn 80, the only thing they are good for is being ground up for fish food….it is that intervening 40 years, when they clop-clop-CLOP around on all fours, neighing and whinnying and generally making horse patooties of themselves that make them so difficult to tolerate.  My poor horse-faced egg-donor…Queen of the Horse-Face Girls!)
Last note–I’m thinking of starting a group of ladies interested in the 2016 elections!  I haven’t really thought out all of the rules for membership…but, I HAVE thought of a name!  Politically Interested Girls (PIGs)   If you know of anyone who is active in the 2016 Election, and is a PIG…just let me know….and I might decide that this is a viable group!  And, like any POLITICAL group, Waffle-era, Flip-Flop-ers and Big, Fat Fibbers are given a complimentary membership!!
Ok…to the good part!!!  HOUSE UPDATE!!!!
As you can see from the following photos….Windows and doors are installed…after these photos, the insulation was put in, sliding glass door installed and some interior doors were hung.  This week, they are putting the siding on the house and hanging the drywall!!  The pool permit was issued, so next group of photos just may have a SWIMMIN HOLE!!
Love to all of you!!
Front of house–

I
Rear of house 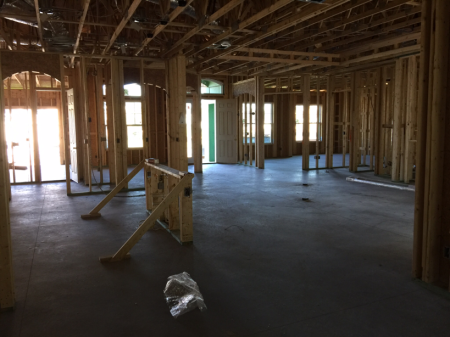 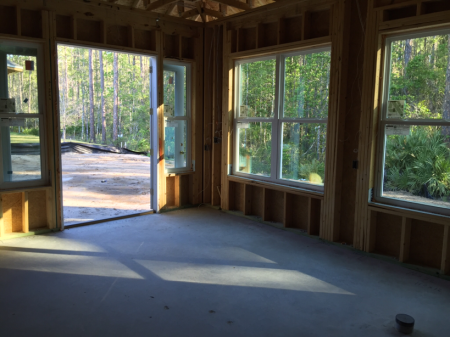 This entry was posted on Tuesday, April 19th, 2016 at 10:36 pm and is filed under Uncategorized. You can follow any responses to this entry through the RSS 2.0 feed. Both comments and pings are currently closed.

6 Responses to House Update!! (And other stuff!)